Platelets are small anucleate cells of the hematopoietic system and are formed by megakaryocytes (MKs) in the bone marrow. At sites of vascular injury platelets adhere to the injured vessel wall and form a hemostatic plug to avoid excessive blood loss and therefore play a fundamental role in hemostasis. In contrast, uncontrolled platelet activation can induce acute vessel occlusion, leading to myocardial infarction or stroke at areas of atherosclerotic plaque rupture and are the leading cause of death in Western countries. Injury of the endothelium leads to exposure of extracellular matrix proteins that serve as substrates for adhesion and activation of circulating platelets. Platelet activation and thrombus formation is a multistage process that involves different signaling pathways to trigger shape change, integrin activation and degranulation of platelets. 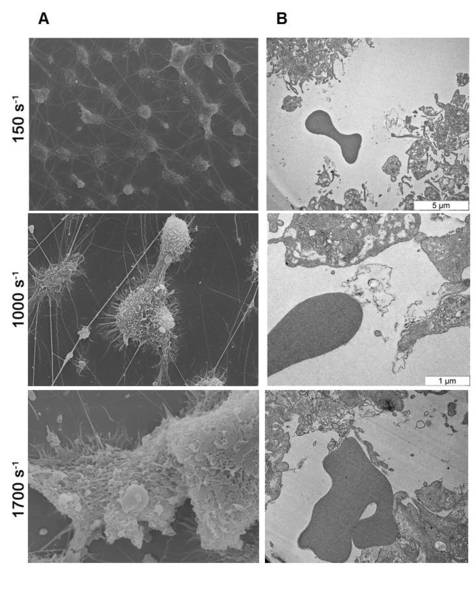 The actin-based cytoskeletal reorganization and asscociated morphological and functional alterations of activated platelets play a fundamental role in the processes of platelet adhesion and aggregation because they -together with fibrinogen binding to activated integrin aIIbb3- lead to platelet aggregation and thrombus formation. Upon platelet activation, the reorganization of the actin and tubulin cytoskeleton leads to a dramatic change in platelet morphology from a discoid to a spheric shape. This rapid shape change is accompanied by a massive increase in the platelet surface, important for a first coverage of vascular lesions after vessel damage. 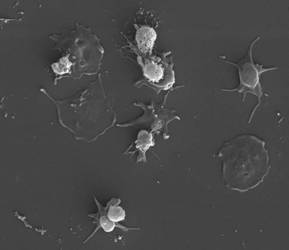 Figure 2: Cytoskeletal reorganization of platelets is mediated by the Rho GTPases RhoA, Rac1 and Cdc42 to induce a strong increase of the platelet surface upon vessel injury. The activation of Rho GTPases is tightly controlled by GTPase activating proteins (GAPs) that switch of the Rho protein and Guanine nucleotide exchange factors (GEFs) important for the activation of Rho to induce the interaction with effector molecules.

The small GTPases of the Rho family, RhoA, Rac1 and Cdc42 play an important role in cytoskeletal reorganization because they induce the formation of actin stress fibres, filopodia and lamellipodia. Moreover, Rho proteins play a role in platelet secretion and phospholipase Cg2 (PLCg2) activation. Furthermore, Cdc42 might be important for the regulation of GPIb-mediated signal transduction pathways. The small GTPases of the Rho family are guanine-nucleotide binding proteins and act as „molecular switches“ that cycle between an active and an inactive state. The strictly controlled activation of Rho proteins is mediated by GTPase-activating proteins (GAPs) that switch off Rho GTPases by stimulating GTP hydrolysis. Recently, we identified OPHN1 and Nadrin, two RhoGAPs with Bin/Amphyphysin/Rvs (BAR) domain, in platelets that regulate Rho GTPase activity and modulate cytoskeletal dynamics. 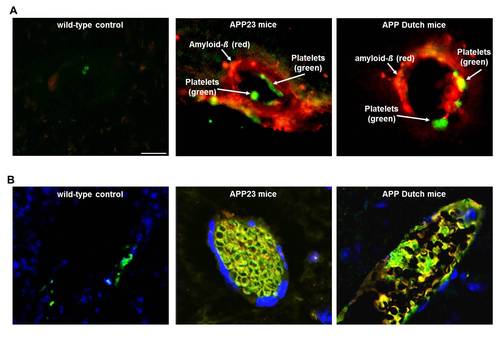 Beside their fundamental role in hemostasis, platelets modulate cellular processes including inflammation, angiogenesis, cell survival and apoptosis, neurodegeneration and tissue repair. On the other hand, platelet activation and thrombus formation is altered in different diseases leading to either bleeding complications or pathological thrombus formation.

For many years platelets have been considered to play a role in neuroinflammatory diseases such as Alzheimer’s disease (AD). AD is characterized by deposits of Amyloid ß (Aß) and strongly related to vascular diseases with platelets playing a critical role in the progression of AD because exposure of platelets to Aß induces platelet activation, platelet Aß release, and enhanced platelet adhesion to collagen in vitro and at the injured carotid artery in vivo. However, the molecular mechanisms and the relation between vascular pathology and amyloid-ß plaque formation in the pathogenesis of AD are not fully understood.

Furthermore, platelets are known to play a role in inflammatory diseases such as sepsis, myocardial infarction, liver injury, etc 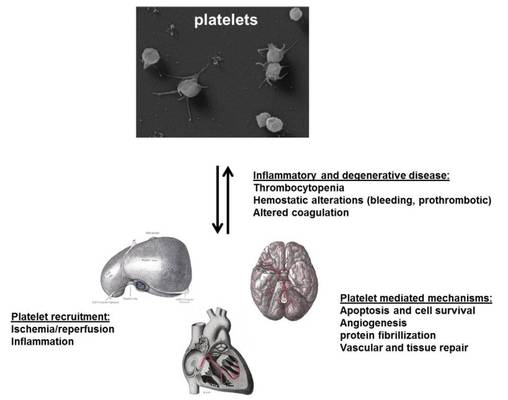